Like that awfully hot day when she really wanted ice cream, and she heard the truck, but she didn’t have any money. But then—oh, it was so lucky—the ice cream truck broke down just outside her house. All the ice cream was melting, so the ice cream man shouted, “Free ice cream! Free ice cream for everyone!” And she got as much ice cream as she wanted! 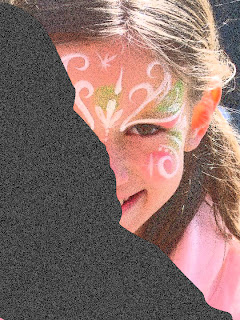 Or another time, she wanted a particular pair of shoes in pale blue leather. But her mother said they were ridiculously expensive, and she wouldn’t spend that kind of money on her own shoes, let alone a child’s.

Simran’s mother was a little unlucky just after she said that: she must have bitten too hard into her cheese sandwich, because her tooth broke off, right in the front of her mouth—which was awfully painful, and awfully ugly, too, until she could get it fixed.

But later that same day, Simran had the best luck. A woman had bought those exact same shoes, just in Simran’s size, for her own daughter. The woman had saved and saved for months to buy the shoes, because she knew her daughter had her heart set on them. But—lucky for Simran!—something must have distracted the woman, because she left the package on the roof of her car. When she drove past Simran’s house, the shoes fell right into Simran’s yard, and the woman drove on, never knowing.

How lucky is that?

Or: in 6th grade, Simran liked this boy Jeremy. But he was the most popular boy in school—the cutest, and the funniest, and the best soccer player—and he never noticed her; you know how that goes. Well: Jeremy was in a dreadful car accident. That wasn’t very lucky for him, because he broke both legs. But it was very, very lucky for Simran, because he was in a wheelchair for many months afterwards. No more soccer for Jeremy! And after a while all his cute, popular friends got tired of sitting around with him, and they ran off to play soccer or ride bikes to the mall. Then Simran had Jeremy alllllll to herself.

Now poor little Emily: she was not so lucky. Back in second grade, their class play was “Sleeping Beauty.” Simran wanted to play Sleeping Beauty herself, of course—but instead, she was cast as Sleeping Beauty’s mother, a boring role where she only had one line (“Oh! How long have I been asleep?”: blah) and wore a stupid costume made out of a paper grocery bag with jewels drawn on it in crayon.

Emily, with her sky-blue eyes and so-pretty long black hair—she got to play Sleeping Beauty, and wear a real-looking diamond tiara and a long blue dress that matched her eyes. So Simran asked Emily, very, very nicely, if she would trade roles with her.

That same day, Emily ran into some very, very bad luck indeed. Something dreadful happened to her—no one knows exactly what, but it must have been quite bad, and quite terrifying. She was missing for three days. And when she reappeared, her black hair had turned pure white, and her blue eyes had emptied, and she couldn’t stop trembling for three days more.

Emily would never say what had happened. In fact, that was way back in second grade, and Emily has not said a single word since the day she disappeared—not a single, solitary word.

On the bright side, Simran got to play Sleeping Beauty after all. Lucky, huh?

It’s funny, actually, when you think about it. Simran’s friends aren’t lucky at all. Her family isn’t so lucky, either, and neither are her neighbors—sometimes they’re pretty unlucky, actually. It’s almost like Simran uses up all the luck in her part of the world!

Like one time the man next door came over to complain about Simran’s cat going to the bathroom in his children’s sandbox. It wasn’t the cat’s fault—a sandbox looks like a litterbox to a cat!—but the neighbor refused to understand that, and said mean things about calling Animal Control if it happened one more time.

But he never got a chance to call Animal Control, because that night, his house very unluckily caught fire and burned to the ground. The family got out okay—well, except for the dad. He was blinded in the fire. He never saw again.

That was definitely some bad luck for him. But, well: maybe he won’t be so mean next time.

(They never did rebuild that house, and now Simran’s cat uses the ashes of their whole house as a litter box. Which is a little funny, as Simran would be the first to point out.)

Another time, Simran’s little sister, when she was only four, was watching some dumb baby show right when Simran wanted to watch Animal Planet. Simran told her very nicely that she had to change the channel, but her sister kicked up an unpleasant, screamy fuss. Her sister might have met some bad luck right then—it’s quite bad luck to scream around Simran, who doesn’t like screaming at all—but just then, their dad came in and swooped Simran’s sister away.

He took the little girl into his room and shut the door. He talked to her in that quiet-but-super-upset voice that parents use to tell small children to stay away from fire, or not to run into traffic. He said: “Look at me. No: look at me, and listen. Never argue with Simran. Never, ever, ever argue with Simran. Do you understand me, honey? Say that you understand me. Just do whatever she says.”

Her father thought Simran couldn’t hear him through the door. She could, though. She was standing right outside, and she heard every word.

But it didn’t make Simran angry. It made her smile to herself, and nod.

So maybe Simran’s dad was a little lucky, after all.

It’s funny that the people around Simran — her family, her neighbors, and Jeremy, and Emily, and that little girl who got no birthday present—even that poor ice cream man, who lost his whole inventory that day, and had no money to replace it, and couldn’t buy food for his family: they were not lucky. They were very, very unlucky.

But it’s okay, because Simran’s always lucky. When Simran wants something, what she wants comes to her—one way or another. So her luck sort of makes up for everyone else’s bad luck, at least in her opinion.

Isn’t she a lucky, lucky girl?
Posted by katherine catmull at 07:55

You have found the Cabinet of Curiosities, a collection of short fictions for the young and mischievous.

Take a seat, coax the lanterns a bit brighter (they are fond of nursery rhymes), have a piece of cinnamon cake (but beware: sometimes the faeries play tricks), and hear a story or two about dark delights and hidden worlds. 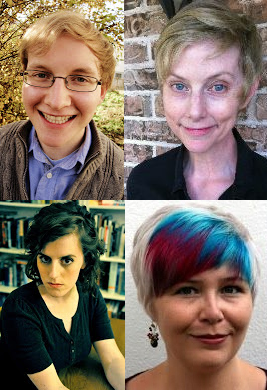